Walking Toward the Light, Photograph by Kim M. Baker 2014

Welcome to Issue Five of Word Soup. What began as a wild-eyed dream of ending hunger one poem at a time continues to amaze me. I am so moved by the generosity of poets, their commitment to issues of social justice, their belief in poetry to bring awareness and ease pain. I humbly thank them for donating their time, talent, and money to this simple effort. The best thing you can do if you are reading this is to donate poems and to share the journal out in the world. Some soulful verse lives here.

In celebration of my recent wedding anniversary, I offer my poetic story of that day. It has had a hugely humbling effect on us all these years. Our simple effort to avoid the usual wedding gifts that we did not need in exchange for food for hungry folks turned into a moment we will cherish forever.

And, please lean in closely and be forever changed by the work of this issue's fine poets:  Tracy Mishkin, Tendai Mwanaka, Kit Zak, Ellen Roberts Young, and Kathryn Kulpa.


See you again in the spring!
Kim


Of Love and Hunger by Kim M. Baker

Our wedding was a cornucopia of tradition:
congregational church ceremony, gaggle of guests, chorus of organ tunes,
gowns and flowers swagged in harvest colors of plum,
family and friends haloed by glorious pew candles,
food and festivity aplenty in Thanksgiving celebration.
Traditional.  Except for throwing rice.

A new study reveals that Americans throw away 470 pounds of food per household per year.

Grain at weddings is ancient,
marrying harvest and happiness,
food and fertility.
Assyrians, Hebrews, and Egyptians
assured abundance with sheaves of wheat.
Victorians tossed white rice,
symbolizing a lifetime of blessings and plentitude.
Romans offered a gift of food to uninvited spirits
to ward off their evil.

According to the USDA, more than 12 million children live in “food insecure” households.

We married late in life,
joined two homes ripe with china and silver and linen,
overflowing with love and laughter and nourishment.
So in our nuptial invitation, we broke with social custom:
we invoked the ancients,
to ward off the evil spirits of childhood hunger,
and asked for gifts.
Of wheat.
Of rice.
Of jars of peanut butter and boxes of pasta and cans of tuna.

Instead of throwing rice, our loved ones showered us with
5000 dollars and three vans packed with groceries for the local pantry.
Just enough to secure food
for a few more hungry families
for a few more desperate days
in this land of milk and honey,
this two-faced nation of charity and want.


The Gleaners by Tracy Mishkin

I can't unclench my jaw. When I pass the Salvation Army kettle, I dig in my purse for coins, talismans to change our luck. Roberto quit another job, picked up one with fewer hours. We eat beans and rice, then rice and beans. I carry the family on my back. Working overtime erodes my sanity. Roberto washes the dishes and slumps on the couch. I ask my son to give up his allowance. He says he would if we all ate an equal slice of the shit pie. When a job fair is on the news, he stares at his stepfather and points to the screen. My mother gives us leftovers. My father tells Roberto to apply again at Wal-Mart. The mail is all pleas to feed the hungry. I used to give to Gleaners. Now, I imagine lining up outside their warehouse for a box of canned chili and soggy peas. When this is over. When this is over. Charity will never mean the same.


Tracy Mishkin's is an MFA student in Creative Writing at Butler University. Her chapbook, I Almost Didn't Make It to McDonald's, was published by Finishing Line Press in 2014, and she has two poems in Reckless Writing 2013: The Continued Modernization of Poetry.

my dog
is restless
for its tea
and scones,

but a deeper
darker
hunger
pecks out my heart.


Tendai Mwanaka's work has appeared in over 300 magazines in over 27 countries, making him the most published Zimbabwean poet of his generation.  Tendai's collection of poetry, Voices from Exile, was published by Lapwing Publications, Northern Ireland in 2010. His novel Keys in the River: Notes from a Modern Chimurenga is a series of interlinked stories that deals with life in modern-day Zimbabwe, published by Savant, USA 2012, Zimbabwe. The Blame Game, a collection of non-fiction pieces, was published by Langaa RPCIIG, Cameroon, 2013.

you hold a thrift-store globe between small hands
point out Ecuador
your five-year-old voice blends the dogged itch
with super-hero certainty.

Kit Zak has retired from years as a college teacher and being a hovering mother. She now focuses on ecology and poetry and has recent poems published or forthcoming in the following journals:  California Quarterly, The Blue Collar Review, and Avocet Quarterly: A Journal of Nature Poems, A Time of Singing, The Broadkill Review, Jellyfish Whispers, and  Newviewnews, as well as five anthologies.  She won second place in a regional poetry contest and has been selected three times to participate in a Delaware Division of the Arts retreat by Delaware's Poet Laureate.

Quit poking at the dregs
in the bottom
of the cider cup.

Questions of which
and whether
make witchy weather.

curl under
a blanket till these winds
blow out.

Too late to choose

either to refuse the apple
or ferment it.


Past Perfect by Ellen Roberts Young

We should have guessed
when paintings lost

Art should refract – in
a fractured world can

only reflect, corroborate
shards under our feet:

No whole to shatter, no
wall to post a protest on,

the artist pokes in rubble,
strikes a pose, strikes out.

Old forms are empty, can’t
satisfy your hunger when

bread is crumbs and all
the wine has spilled.


Ellen Roberts Young is a member of the writing community in Las Cruces, NM.  Her chapbooks Accidents (2004) and The Map of Longing (2009) are published by Finishing Line Press.  Made and Remade, a collection of poems reflecting on writing of William Paley, is just out from WordTech Editions.  She is co-editor of Sin Fronteras/Writers Without Borders Journal and blogs at www.freethoughtandmetaphor.com.


A Girl Asleep (After Vermeer) by Kathryn Kulpa

I’ll regret falling asleep later but now it’s all I want, to let this berry-red wine lull me into dreams while my lips still ache from stolen kisses, my cheeks on fire--they put those poor dull apples to shame, he said. His fingers loosing my kerchief. The mistress will wake, I said, but I knew I’d already surrendered and he knew it too--the wine, his warm breath, his beard rough against my neck like coarse-spun flax--O the wine made me reckless of ruin, but it was more than the wine, the tumbled fruit. Who’d take an old dried apple over a ripe persimmon, he said--and I found myself falling, coming loose, laughing too when the wine spilled on this table I’d set, this cloth I’d washed with fingers rough and raw from the scullery, but he kissed them just the same, drew them across his mouth, and I was his forever; I’m his now as I droop over this table and dream that tomorrow won’t come and I won’t regret this night, this moment, and I won’t have to wake and wonder why he called me Jannie when my name is Margriet.

Kathryn Kulpa is the author of a short story collection, Pleasant Drugs (Mid-List Press), and a micro-fiction chapbook, Who's the Skirt?, published by the Origami Poems Project. Her work has appeared or is forthcoming in Cape Cod Poetry Review, Florida Review, Foliate Oak, Monkeybicycle, NANO Fiction, and Superstition Review. As a two-legged being, she is a minority member of her own household.
h 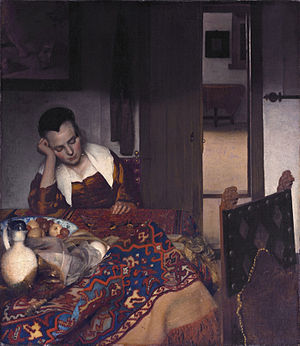 A Girl Asleep by Johannes Vermeer